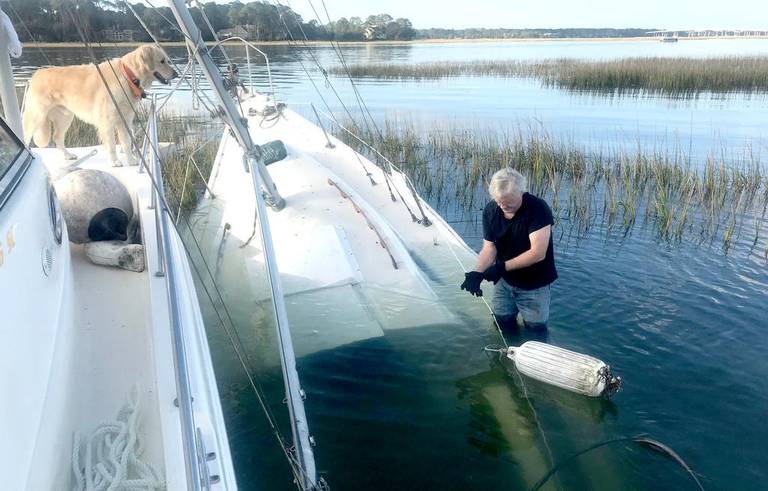 Posted at 09:00h in Our Community by Lauren Williams 0 Comments
0 Likes
Share

BY MAGGIE ANGST – The Island Packet

Removing derelict boats from South Carolina waterways is no simple task. Just ask Hilton Head Island resident Russell Patterson, who has been at it for about three months.

After watching people use Broad Creek as a dumping ground for their abandoned boats — and realizing that state and local agencies didn’t have the funding to remove them — Patterson took matters into his own hands.

As a part of the task, Russell and a group of friends have tried on four separate occasions to raise Nanna, a 30-feet boat that sunk in Broad Creek more than two years ago, to no avail. Now, they’ll have to wait two more months for a professional diving crew to take a stab at it.

“We feel confident that we’re on the right path,” he said. “… Hopefully, people — as they’re driving over the bridge or riding down the Broad Creek — will be able to see a big different in the next four, five, six months.”

Officials agree that South Carolina has an ongoing problem with derelict boats. The state is among 19 of the 30 U.S. coastal states without a funding mechanism for the removal of abandoned or derelict boats, according to the National Oceanic and Atmospheric Administration.

And Beaufort County — which is 50 percent water and wetlands — is stuck directly in the middle of it.

In early October, officers at the South Carolina Department of Natural Resources began investigating boats anchored in waterways across Beaufort County, including 30 boats in the Broad Creek.

As of Wednesday, eight boats in the creek were officially deemed abandoned, according to DNR investigator Michael Brock. Officials at DNR spent 90 days searching for their owners, but were unable to locate them.

Now, due to a lack of state and local funding, it’s up to Patterson and his friends to actually remove the boats from the waterway.

“Unfortunately, they have to clean up the mess of their fellow citizens who left their boats for other people to deal with,” Brock said. “But it’s impressive to see a group of private citizens step up and care enough about the waterways to do this.”

Patterson has raised $14,500 in private donations so far for the removal and demolition of the boats, but does not expect that to cover it all.

The cost of removing an abandoned boat from a waterway can range from a few hundred dollars to several thousand dollars depending on the size of the boat and where it’s located.

Continue Reading No More Dumping Ground? in The Island Packet.

Sorry, the comment form is closed at this time.